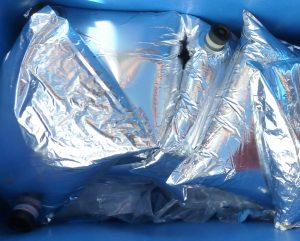 About a minute after I get on the train, a guy comes on and heads for the window seat across the aisle from mine.

It’s a quarter past ten in the morning but already he smells of the cheap wine he’s carrying in two metallic goon bags, the cardboard casks in which they came discarded.

He looks rough, unshaven and wobbly. He slumps into the seat, muttering to himself. One cord of a pair of headphones hangs from his ear but he doesn’t seem to be having a conversation with anyone on the other end of the slim black phone that teeters on the edge of the seat beside him.

He asks how I’m doing today then stops himself.

‘First of all, good morning!’ he says, enunciating in the careful tones of a drunk who does not think he sounds drunk, as though this ritual of courtesy is one we have rehearsed before.

I say hello, confirm that I am having a nice day and that, yes, the weather is indeed lovely outside. I pick up my phone, as I had been in the process of doing when he boarded the train, and open my Facebook app. He takes a deep drag from one of his goon bags, spigoting the wine directly into his mouth, the other of which now sits leaking on the floor.

As we wait for our journey to begin, a girl much younger than I am gets on. The man asks her about her necklace. She glances at me, answers his question. When I look up from my phone again, she is gone.

The train finally squeals into motion and we begin to churn towards the city. At each stop, passengers board. They all glance at the man with the goon bags who is occasionally muttering to himself and then at me in a meeting of the eyes that confirms that, no, he is not with me, yes, something is not quite right with him and, yes, we should all keep a quiet eye on him.

Without warning, he lashes out, whacking the window beside him with a loud thump. We all look and see that there is a moth. He has missed it.

Now he turns to another girl who has recently boarded and is sitting opposite me, one seat closer to the aisle, one seat closer to him. She looks to be in her late teens, pretty, of some Asian decent that I cannot identify – perhaps a Polynesian or Thai mix. She is minding her own business, looking at her phone.

‘Hey,’ he says to her. ‘Hey, look at this shit.’ I cannot hear him clearly but he makes a comment about the ‘two fucks’ sitting in the seats in front of him, what I have taken to be a father and a son travelling together. Their backs are to him and their conversation carries on. Either they do not hear him or they have chosen not to respond. These people are city, after all, Australians and Melbournians at that. They are perhaps wary but it will take more than this guy and his twin sacks of wine to rattle them.

He takes another drag, sucking from the spigot of his bag.

He roars, a nondescript animal sound, slumps back in his seat and sucks on his bag.

Maybe I am skittish, small town, but I think I should be ready. He is unstable, unpredictable. I don’t know what he is capable of and that scares me.

The train nears Tottenham Station and he makes as though he may move towards the door. As he stands, he drops one of his goon bags, the one that has been leaking, and as the train rattles, he lurches into the girl sitting opposite me. Now the gentleman of courtesy, he apologizes to her, tells her the wine on the floor is nothing to worry about.

She smiles, assuring him that it’s all OK, but now he’s plumped down one seat closer and she has moved one seat further away. He looks at the vacant seat and back at her. He leans forward and steadies himself, his elbows planted on his knees, staring into her eyes, fixated on her with the tunnel vision of someone deeply, violently drunk.

‘Hey,’ he says, enunciating carefully, ‘can I ask you something?’

She does not respond. She does not move any further away – to move to the window seat would only incite him further – but she leans away, her face frozen in horror. She is afraid beyond courtesy. I can think of only one thing to do.

I lean forward and touch her arm, close, cozy.

‘Say, where did you get your handbag?’

Shocked, she turns and looks at me, my question bizarre and incongruous. She stammers, at a loss for words. I make keen eye contact with her and ask again.

‘I’m sure I saw this bag at Target. I think it might have been on sale … ’

Now she understands and engages in our charade of polite conversation, aware that I could not care any less about where she got her bag and whether or not it was on sale.

The pleasant mechanical voice accompanies the slowing of the train and the man stands with a loud grunt. He steadies himself on the back of the seat, grabbing his goon bags and lunging towards the door. The girl and I maintain eye contact, pretending to laugh, actually laughing with nervous tension, until the doors slide open. I glance away just long enough to see the man standing in the doorway looking back at us and for a moment, I fear he will change his mind.

In the last moments before the doors close, though, he stumbles out of the train and onto the platform. He takes a long look around, weaves, looks back at the door, watches at the slide closed behind him. As the train pulls away, he lurches out of the bright morning sun and into the shadows of the station, clutching his goon bags.