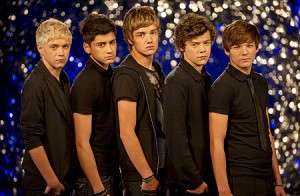 Today I’d like to send a shout out to five little pricks named Niall, Zayn, Liam, Harry and Louis – collectively known as the wildly popular boy band One Direction. If you’re not sure who I’m talking about, you will have almost certainly heard the song they’re most famous for.

It’s this really catchy, boppy tune about a girl who flips her hair and looks at the floor. The chorus, one you can’t help but sing along with, ends with two killer lines, the first of which is:
“You don’t know – oh – OH! You don’t know you’re beautiful – ul – UL!”

Now, there are a hundred ways you could complete that idea, such as:

B)      And that’s a really unattractive quality so stop it

C)      I really wish you were empowered and confident instead

I sort of get their point. They’re a boy band, after all, and will have spent way too much time in places like Los Angeles, where the hottest high school graduation gift parents can give their daughters this year is breast implants and pole dancing lessons. So they’re probably done spending time with girls with an overly amped up sense of self worth.

But when I was 16, I was exactly the sort of girl these boys were talking about. I didn’t wear make-up, I DID wear thick glasses, I hid behind my hair and I was completely insecure. I now look at photos of myself when I was 16, and my Now Self just wants to shake my Then Self.

Thankfully, Christina Aguilera came along a few years later and convinced us all that we were beautiful, no matter what they say, and that words couldn’t bring us down. And Lady Gaga had the kindness to remind us that God makes no mistakes and so we should love ourselves because, baby, we were born this way. (She’s an odd source for Zen-like wisdom, I know, but there you go.)

In the last two decades, girls have finally begun learning that they should love and respect themselves. And then One f*cking Direction comes along and tells them that they don’t know they’re beautiful followed by the anti-feminist punch line of the century:

“That’s what makes you beautiful.”

On the surface, that sounds sweet, only now we have a whole new generation of girls thinking they shouldn’t recognise their own inherent beauty because One Direction has told them that being insecure and hating yourself is beautiful. And the girls love it.

What the boys SHOULD have said is this: “You don’t know you’re beautiful – that’s what makes you more likely to blow me.” Because when a girl doesn’t know she’s beautiful and she needs some boy to tell her that she is, you can convince her to do just about anything.

Thanks a lot, you sleazy little bastards.

1 thought on “Insecure – the New Sexy”