A few weeks ago, I posted this photo on Facebook… 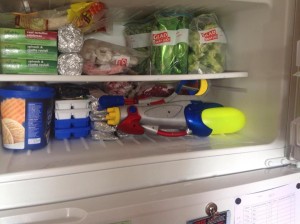 It seemed obvious to me at the time that the photo was funny because one of my charming little boys had tried to create ‘bullets of ice’ by freezing the entire water gun.

So you can imagine my surprise when I got over a dozen comments, all mentioning how ‘freakishly’ organised my freezer is.

Now first of all, there are few contexts in which you can use the word ‘freakish’ to describe a person and it be a compliment. But more importantly, I’d like to clarify right here and now that I am NOT a completely neurotic OCD madwoman, and I have the photos to prove it.

Exhibit A. The Laundry Line 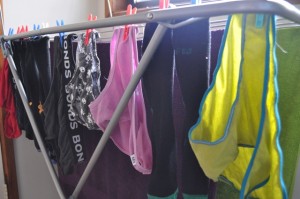 At first glance, you might notice that the underwear on my laundry drying rack is neat and orderly. Upon closer inspection, however, you’ll notice that the kids’ underwear are mixed willy nilly with those undies belonging to the adults of the house. There is no organisation by size, gender OR colour. Who’s OCD? CLEARLY not me.

Exhibit B: The Cleaning Supplies Cupboard 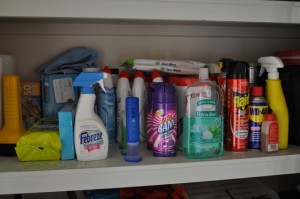 Ok, yes, I have enough cleaning supplies to freshen up the bathroom in a ‘guys only’ college dorm. But surely you can see that the spray bottles have NOT been aligned, the dusting cloth has been left in an untidy heap and the bottles of toilet cleaner have been lined up vertically whilst everything has been orderly horizontally. Who can call that OCD? 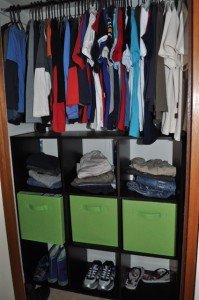 Right, so, some might take issue with the fact that I have 1) hung all the boys’ shirts on hangers, 2) organised those shirts in order from long sleeved to short sleeved and 3) stacked the shorts and jeans grouped by length of pant. Also, this side of the closet belongs to only one of the boys, and his brother has his own whole side. This photo does very little to redeem my status as OCD fanatic, but I would like to point out the one pair of thongs that have gone askew. There! Right there! Bottom right hand corner! They’re all caterwonky – see? If I were completely obsessive compulsive, I would go fix that right now. Hang on a second….I’ll be right back. 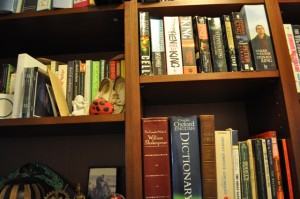 Ok, THIS section of the bookcase has been organised the way God intended – all the Stephen Kings are together, organized with the tallest books on the edges and the shorter books in the middle. Over there on the left, you can see that the Laurie Notaros have been kept separate from the David Sedarises. And it goes without saying that the Bible, the dictionary and the Complete Works of Shakespeare belong on the same shelf together, right beside Strunk and White’s “Elements of Style”. However…. 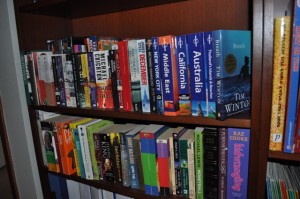 …if you look ONE SHELF DOWN and to the left, you’ll see that it’s all gone wrong. On one whole shelf, the books have been doubled up so you CAN’T EVEN SEE what’s in the back. The Harry Potters are not together, the Bill Brysons are NOWHERE NEAR the other travel books and heaven only knows where the rest of the Jeremy Clarksons have ended up. I mean seriously, it’s OBVIOUS the Charlaine Harrises should be grouped in order from the first in the series to the last but they’re ALL OVER THE PLACE! I don’t think you can call me OCD with this sort of madness going on right outside my bedroom door. Every. Single. Day. 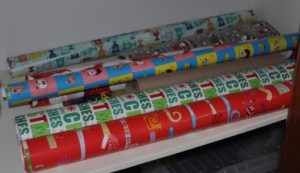 Haven’t we ALL seen those life hack images in which people have neatly sorted their gift wrapping paper WAY more cleverly than THIS disorganised heap? HAVEN’T WE??? And yet there’s the Christmas paper RIGHT IN FRONT when Christmas is MONTHS away, the one random roll of Father’s Day paper is sitting on top and the generic SpongeBob paper (suitable for both boys AND girls – any occasion, really) holds no orderly place whatsoever. And you guys called me freakish. HA! They’re not even in alphabetical order by slogan! 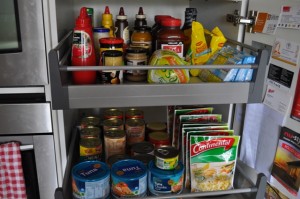 Let me first say that, in the event of a zombie apocalypse, if you happen to be in the Melbourne area you should come to my house. I plan to become a Post-Apocalyptic Overlord, forcing other, less prepared survivors to trade goods and services for the many and sundry dried goods I will have on hand. Just in case. But this cupboard is NO indication that I’m OCD. Just look at the state of it – the packet of two minute noodles is all wonky, one packet of microwave popcorn is about to fall over and what’s the story with those rice cakes? They belong NOWHERE! OCD, my left foot. 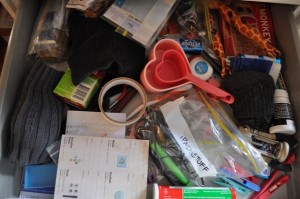 Ok, I wouldn’t call it the Random Stuff Drawer if there were a more orderly way to describe these objects, but as you can see, this collection of stuff is obviously random and none of it really belongs anywhere else in the house. Now, if I were OCD, like so many of you SUGGEST, I would have arranged these things in little mini-tubs or a drawer organiser – available for cheap at any discount store. But look at the state of this drawer! Somewhere in Arkansas, my mother just burst into tears and she doesn’t know why. I have no excuse whatsoever for this disarray, except to say that I am clearly NOT as OCD as some of you seem to think.

I hope this neat succession of photos proves my point beyond a shadow of a doubt. Now if you’ll all excuse me, I need to make a quick trip to my local discount store. None of your business what for…..